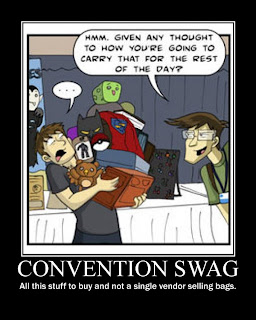 I've had this issue.  The first real live convention I went to I found lots of stuff I wanted.  The only thing that stopped me from buying it all was the realization that I would hardly be able to carry it.  Sure there were some vendors selling the ubiquitous "bag of holding" bags but those weren't going to cut it.  This was a truly massive pile of swag I was collecting, between the free stuff and the stuff I bought. I came prepared the next year.  My own bag of holding and a hotel room close enough to make trips back during the day to avoid having to truck around the pile everywhere.

Art from here
LooneyDM out
Posted by Looney at 5:16 PM No comments: 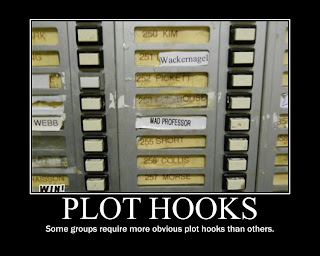 It could be railroading, but you know what if the players like it it's not a bad thing.  Sure there are bad railroadings but not every railroad is boring or horrible.  Of course it helps if you refer to it as "guidance" rather than making choo choo noises.

Art from icanhascheezburger.com
LooneyDM out
Posted by Looney at 6:41 PM No comments: 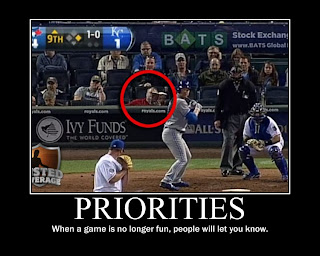 I just wish I could see what book he was reading.  It must be a good one.

Picture from GIS for royals fan reading a book
LooneyDM out
Posted by Looney at 4:51 PM 2 comments: 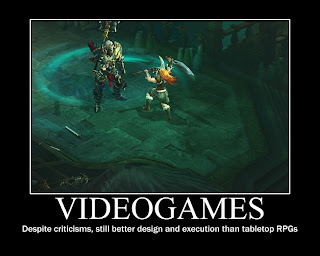 There is quite a dearth of well designed RPGs out there.  At least ones that get played in my area.  That said the diablo 3 free play weekend (yeah stress test whatever, it was a demo weekend and you know it) brought something up that I thought worth considering.  While Diablo 3 may suffer in the replayability column due to the way the skills are laid out, tabletop RPGs could learn something from it.  To sum up the skills in brief, as you level up more skills (which would more likely be described as powers or spells in a tabletop game) are unlocked for use.  You have skills you can use over and over without limit and the rest are on based on various resources (mana, ki, rage) that either replenish over time or when you perform specific actions (usually attacking with your over and over skill).  The special part is that you can only use one skill from a group at a time.  You can switch to any skill from that group with a few seconds of switch over time, enough that you don't want to switch mid battle, but not long enough that you can't switch between them.  This may hurt the replayability of diablo 3, but I believe something like this could work wonders for a tabletop RPG.  Especially if tempered correctly.  Swapping out your skill in mechanics for your skill in bluff might be out of the question, but what about swapping out your improved trip feat for an improved disarm feat.  Or your "do lots of damage with poor accuracy attack" for your "precise attack that doesn't do as much damage".  The big issue in the fighter wizard gap in 3.5 revolves around flexibility.  Wizard has a tool for any situation, assuming he prepared it.  What if the fighter could switch stuff around so he could have a larger stable of useful abilities.  Food for thought.  Admittedly, Tome of Battle goes down this route somewhat with its maneuvers readied vs maneuvers known but I'd make it possible to grab any maneuver from the entirety of your class maneuver list rather than the subset that is your maneuvers know.

Art from GIS for diablo 3
LooneyDM out
Posted by Looney at 6:40 PM No comments: 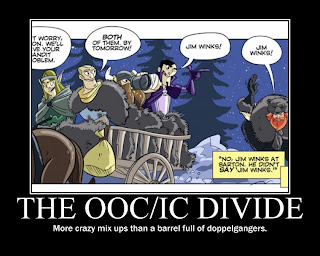 I'm sure we've all had humor arising from the out of character vs in character divide.  It's always great when your dwarf fighter declares that they wish they had an uzi.  Uzi?  What is this uzi you speak of comes the cry from the rest of the table.  Thus begins the merriment.  I've heard at some tables you have to hold your hands up on your heads like moose antlers to indicate you are speaking out of character.  This is all to avoid confusion you see.  Nothing to do with making everyone look like they're completely insane.  Or to amuse the heck out of everyone else.  Nope.  Not at all.

Art from GIS for D&D humor and probably penny arcade as well
LooneyDM out
Posted by Looney at 7:04 PM No comments: 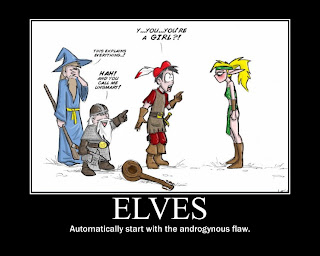 If you've made jokes about elves, you've probably made this joke at least once.  Maybe more than once.  They deserve it.  Their stuck up aloofness demands they be mocked.  Such  is the truth of elves and forever it shall be so.  Except in Eberron because in Eberron they are the evil horse raiders of rohan.

Art from here
LooneyDM out
Posted by Looney at 5:25 PM No comments: 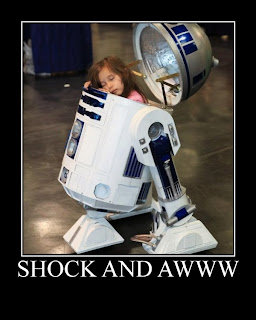 This hit me seeing the picture.  I have no witty addtions.

Picture found here
LooneyDM out
Posted by Looney at 5:20 PM No comments: 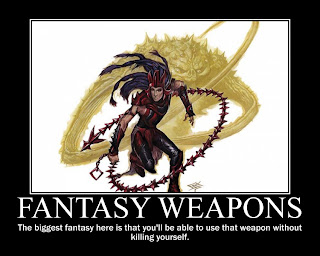 As much as the poster might suggest to the contrary I don't have an issue with crazy weapons in fantasy games.  After all the magic users are likely tearing the fabric of space time to shreds, what's a little over the topness on the part of the non-magical martial peeps.  Which brings up a completely alien frame of mind to me.  There is this school of thought that anything is justifiable with the words "it's magic".  Wizard turns into a ferocious beast from the far realms and proceeds to rip faces? "it's magic" Cleric calls down divine fire completely annihilating enemies but leaving friends untouched?  "it's magic" Contrasting wise if the mundanes want to do something slightly beyond the concept of what the school of thought considers to be "realistic" that it's completely out of the question and unthinkable.  Fighter wants to hit an enemy so hard it explodes and damages nearby enemies?  "couldn't possibly happen unless it was magical and fighters don't get magic or they're not fighters anymore harrumph"  Seriously why can't "it's badass" be a reason for why the mundane melee wants to accomplish something beyond "realism"?  This is fantasy for goodness sake, I expect realism to be the last thing I apply to any given situation!  Bazinga! 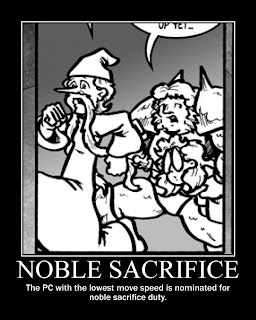 You know those days when you feel that the rest of the party is out to get you.  When you're a dwarf in full plate on foot, the rest of the party is mounted or packing longstrider boots, and they want to take on the terribly dangerous but fairly slow gigantic serpent.  Yup, you've been nominated for noble sacrifice duty!  Noble sacrifice duty is a long time honored tradition among adventuring parties.  Someone will have to take up the valorous sword of party defense to allow all of the smarter or luckier (depending on how you decide who has to take noble sacrifice duty) party members to escape with their lives.  This is why I try to stay away from characters with both low int and low wis.  One or the other can keep you out of noble sacrifice duty for a good long while.  Also playing the cleric helps.  No one wants to lose the healer.

Posted by Looney at 6:12 PM No comments: 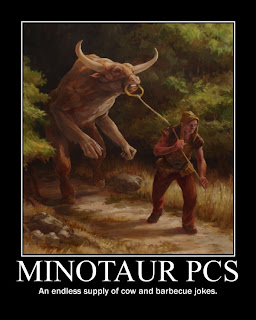 If you had one in your group you know you'd make the same jokes.  Every week.  Just like we do.  Non human elf dwarf or hobbit, I mean halfling pcs have a tendancy to bring out the odd jokes.  Or at least the obvious puntastic ones.  Take drow for example.  Rhymes with cow.  The jokes pretty much write themselves from there on out.  Or deva.  I mean really.  Who's the deva of the party, oh yeah.  Too easy.

Art from here.
LooneyDM out

Modular and the RPG 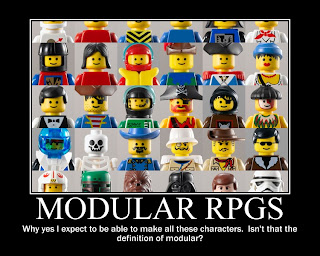 Good news today in dndnext or 5e or whatever it's being called now.  This article gives actual specifics of how they're going to make the game modular and cater to the "simple choices" and "tinkerer" player types.  I for one am highly optimistic.  I place myself firmly within the "tinkerer" playstyle unless involved in a one shot.  That said D&D since 3rd edition has been atrocious for one shots due to the lack of quick to build characters.  It is my personal hope that they can pull this off so the "simple choices" and "tinkerer" players can play at the same table without issue.  Of course this requires things.  The overarching themes and backgrounds need to be built from discrete pieces that are balanced against one another in functional utility.  For example if the power attack feat or obtain familiar feat are part of distinct themes those need to be balanced against each other unless they are packaged with other options when broken out of those themes.  Whether or not this can be managed remains to be seen.  Looking forward to this weekend as well as another group of players descends on the dndnext playtest at pax east.  I hope their impressions make it to the net post haste even if they can't tell us anything specific.

Art from GIS for lego
LooneyDM out
Posted by Looney at 3:51 PM No comments: 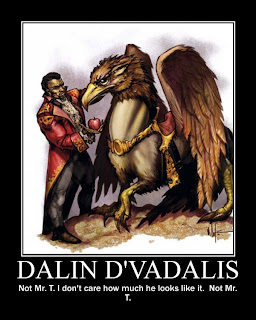 The resemblance is eerie.  The hair even matches to a point.  Of course the griffin doesn't but that extraneous.  Today starts my new Eberron campaign.  Which has everything to do with this poster.  Specifically the Mr. T part.  The new campaign is the A-team in Eberron.  They haven't picked out roles yet, and there's more of them than were on the original A-team.  I expect crazy plans to abound.  That's about standard for my groups.  This is of course half the fun.  The other half being violence. 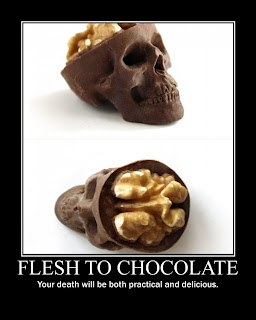 I know it's not technically exactly correct but the picture is too cool to not use.  There's so many BBEGs these days littering the world with the dead bodies of heroes.  You'd think one of them would try to be more efficient or environmentally conscious (especially those druids).  Or at least more practical than straight up stab, kill, burn.  Thankfully some are.  Like the necromancers (reuse!), or the medusa (decorative!), or the ones who have the decency to disintegrate the bodies (tidy!).  But none match the practicality of a good flesh to chocolate spell.

I saw this first on Geeks are Sexy
LooneyDM out
Posted by Looney at 7:37 PM No comments: 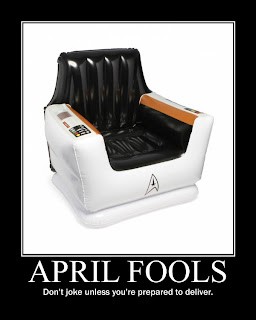 April fools is at once an annoying and amusing time for me.  On one hand there are places like thinkgeek where I look forward to the jokes they will produce.  A lot of that has to do with the fact that they later create the joke items for sale.  Whoo hoo!  It's a genius idea really.  They use April Fools as a test bed for all the out there ideas they have and see what people want.  On the other hand I despise dealing with April Fools for blogs, comics, and any place else that I go to for more serious content updates.  Nothing ruins the flow of a story for me like an out of place joke strip.  Annoyance abounds when a content site that updates only once a week updates with a lazy joke in place of a real update.  The knowing that you'll have to wait another week merely increases the perturbance. Even better is the sites that aren't scheduled for an update on April Fools but take it upon themselves to have an April Fools joke anyways.  It has happened.

Art from Thinkgeek
LooneyDM out
Posted by Looney at 3:19 PM No comments:

Looney
I dabble in most everything geek from RPing to video games to anime and more. Follow me on twitter if you dare! @LooneyDM 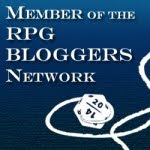